You are here: Home / Strapping / Benefit of Prevention 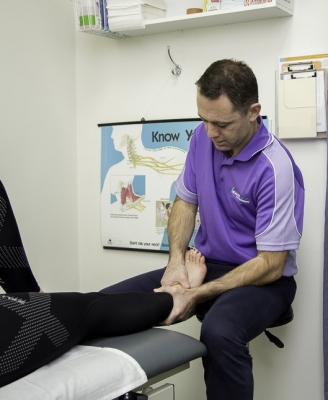 As the weather and preseason starts to heat up, many of us are looking forward to cool changes and starting winter competitions. But as participants look ahead to the season coming one thing that often gets overlooked is the benefit of prevention.

As many groups start to progress into change of direction, sport specific exercise and agility exercises, now is the time to get on the prevention bandwagon. One of the best examples of the benefit of prevention is with ankle sprains.

Ankle sprains or “rolled ankles” are the most common type of sporting injuries. These sprains normally occur in any sport that involves rapid change of direction or pivoting on a single foot.

Typically these injuries occur with the ankle rolling inwards, normally when changing direction or landing awkwardly. However, ankle sprains may also roll outwards, although this is far less common.

After rolling the ankle once the likelihood of rolling it again skyrockets, leaving the individual at a high risk of chronic instability if not managed correctly.

This is where prevention comes into its own: minimising the chances of the injury occurring in the first place (and thus avoiding time on the sideline); and helping avoid re-injury.

Many sporting participants use braces and tape ankles when playing as a preventative measure.

Whilst this is a good method, the evidence suggests this decreases the players’ fear of re-injury, rather than improving the ankles stability.

A study published in 2016, and conducted in Sydney on elite and semi-elite netballers, found that limitations in dynamic and/or static balance were significant predisposing factors for risk of ankle sprain(s) throughout the season.

The benefit of this study is that the outcomes can be transferred across all sports. Regardless of if you are ducking and weaving around a pack playing footy or crossing defenders on the basketball courts, the results of this study can apply to you!

So if you’re changing direction quickly, a prevention based exercise program can help you do it all season!

Keeping girls in sport the name of the game