The Sheer Fun of Sport

You are here: Home / Sport / The Sheer Fun of Sport 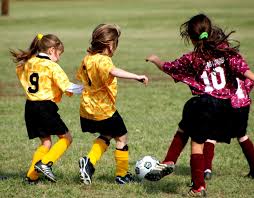 Recently the Australian Sports Commission have found that there is a large drop off in participation rates in sport after the age of 11.  Other reports have suggested that teenage girls are likely to remove themselves from competitive sports three to four years earlier than their male peers.  There are many concerns in this area, particularly with the rising levels of childhood obesity and teenage mental health deterioration, that team sport environments have the potential to assist in a positive direction.  There are also countless values that can be taught by sporting and team environments.

It seems that there are many sports that have dropped the ball in terms of understanding exactly what the goals of sport participation should be.  Many sports are engineering junior programs with a major goal being talent identification so that players can be put into elite programs to reach the highest level.  And while we all take pride in seeing local kids make good at higher levels, we need to acknowledge that this is an incredibly small number of children who play sport.  The problem with programs that focus on talent and repeatedly highlight this is that they can inadvertently promote a feeling of failure amongst those who never see themselves reaching elite levels. Obviously this is the huge majority.  The natural progression from failure is to give up.  Sporting bodies need to acknowledge that participation is the key to their success.  Elite talent is at the top of the pyramid and any strategy that broadens its base will naturally increase what is at the top.  Likewise governing bodies need to look at how sports are funded with taxpayer funds.  In the lead up to the Rio Olympics sports were funded largely on their potential to win medals.  While it can’t be denied that the general public feel good about seeing our national athletes perform well on the world stage, it does not necessarily mean that success transfers into greater participation.  It is reasonable to expect that government expenditure be done in a manner that gains greatest value across the board, and that surely means that developing greater sports participation should be a major factor.

Failure is the by-product of a heavy emphasis on winning and losing.  While there has developed an extreme in some areas where scores are not recorded and all players get a trophy at the end of the season, a return to the old values of doing your best no matter what is a valuable trait to promote.  Personally I think keeping scores is not a bad thing.  If we choose to define our children by the fact that their score was higher or lower than another’s then a feeling of failure and a reluctance to participate is inevitable.  Life, not just sport, is full of wins and losses.  However the better people are not necessarily winners, rather those who take the loss and evaluate it to improve.  Those who do their best only to acknowledge that someone else’s best was better that theirs on the day and are prepared to accept this.

The Reason for Preseason
Scroll to top