Umpires need to be just as fit as players

You are here: Home / Sport / Umpires need to be just as fit as players 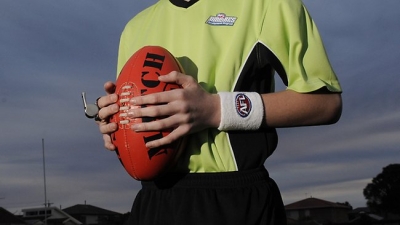 When people think about the start of the football season, they often think about the players and the preparation they need to give their brains and bodies for the games to come.

We respect the skills, physicality, teamwork and the decision-making these players need to have under pressure.

But we often forget the other group of people who work hard for these same attributes to give the sporting public the fair and fun game we know so well.

I’m of course speaking of the umpires who officiate the games.

Like any other sporting team, umpires need to keep their skills and physical fitness at a high level so that they can perform on game day.

Umpires take part in a preseason to develop their fitness and train at least two nights a week to maintain skills and a good running ability.

It’s a well-known fact that decision-making accuracy decreases when we are under fatigue.

A study conducted on the North Eastern AFL umpires found that physical demands are greatest in the first quarter of the match and decision-making ability is at its poorest in this quarter.

This suggests that physical fitness is a key aspect of an umpire’s decision-making.

In fact, umpires in the local leagues will run somewhere between 12 and 17 kilometres a game!

Just as players need to perform bursts of high intensity work, so too do umpires with approximately 28 per cent of games performed at high intensity (more than 14.4km/h).

The type of interval training allows us to run from one end of the field to the other at a jog before sprinting in the other direction when there is a turn over or ball up.

Umpires also need to prevent and manage injuries so that all their attention is on the game.

Before training and games, umpires perform a thorough dynamic warm-up to increase blood flow to the muscles, ligaments and joints.

Stretching is also a key routine umpires prescribe to after any running session. Proper nutrition is important before during and after the match to minimise fatigue and recover in preparation for the following week. I always opt for a sports drink at half-time.

So next time you want to boo at an umpire or argue with their decision, please remember that they have worked just as hard as the players to do the job they’re doing and they only want to get the decisions right.